I'm Pauls mom. I think of you 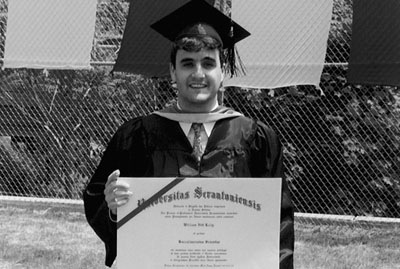 This was Billy Kelly and so much more. Anyone who met Billy made an instant and loyal friend. Whatever endeavor Billy embarked upon, his meticulous focus and passion brought it to life. Whether it was waxing his surf board, cooking Cajun catfish, playing with his nephews and nieces, fixing his boat, teaching his brother-in-law to sail or picking out a bottle of wine. He enjoyed the process just as much as, if not more than, the end result.

Billy grew up in Yardley, Pennsylvania and graduated from the University of Scranton. His true home was on Long Beach Island where he spent many childhood summers and most weekends during his adulthood.

On LBI, Billy loved to go surfing, sailing, duck hunting and fishing, as well as just plain hanging out on the beach. He also enjoyed numerous years at Crane’s Surf City Hotel working his way through the ranks as a dishwasher, cook, and bartender.

Since 1994, Billy worked for Bloomberg, LP in Princeton, NJ and their affiliate, Bloomberg Tradebook LLC, in New York City. Just last year, he won their Heart and Soul Award for his exemplary work ethic. On September 11, 2001, Billy attended a conference at Windows on the World at the World Trade Center, Tower One. We lost Billy that day along with thousands of other innocent victims.

Billy’s family and friends would like to celebrate his life and remember how he touched so many lives in such extraordinary and special ways by hosting an annual golf tournament in his honor. All the proceeds from the tournament will go toward the William Hill Kelly, Jr. Endowed Scholarship at the University of Scranton. We hope you’ll be able to join us to celebrate Bill’s life and support this worthy endeavor.

If you lived on Long Beach Island in New Jersey, you knew William H. Kelly Jr. Although Mr. Kelly grew up in Bucks County, Pa., his family spent summers on the island, where he was able to indulge his passion for the water, learning to sail and surf. "My friends would joke around; they used to call him `Mr. L.B.I.,' " said his girlfriend of three years, Sue Magee, an employee of Bloomberg L.P., where Mr. Kelly also worked.

In fact, even if you did not live on Long Beach Island, you may have known Mr. Kelly, or the type of person he was. "He wasn't a loud, life-of-the-party kind of guy, but he always sought out the person in any situation who wasn't comfortable, and made them feel welcome," said his sister Colleen Kelly. Mr. Kelly, 30, who lived in Stuyvesant Town, was a favorite uncle to his many nieces and nephews. Once, instead of giving them all individual Christmas gifts, he rented an ice rink for an afternoon, and invited his whole family.

After Sept. 11, his mother, JoAnne Kelly, was surprised to receive an envelope full of a 4-year-old Billy's dark curls, from an early trip to the barber. She had given the envelope to a beloved neighbor, whom Mr. Kelly had nicknamed Pal, as a joke, and Pal had saved it for 26 years. Now Mrs. Kelly has something of her son left to treasure.