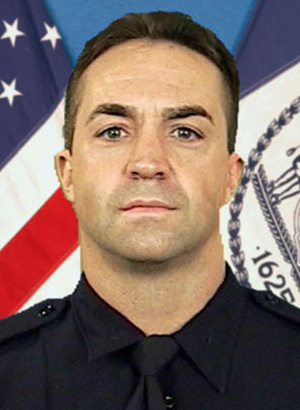 Officer Brophy gave 11 years of service in the 114th and 109th Precincts and Fleet Services Division. He too received recognition for excellent police duty.

Officer Brophy worked in the rescue, recovery and clean-up effort at the World Trade Center as well as covered various posts in Lower Manhattan after the 9/11 attacks.

Thomas G., of Smithtown, NY on April 21, 2005 in his 36th year. NYPD 109th Precinct, Flushing, NY. Beloved husband of Rita. Loving father of Matthew. Devoted son of Janice and Eric Schwarz and Thomas and Marsha Brophy. Dear brother of Brian Brophy, Justin and Erika Schwarz and brother of the NYPD. Dear grandson of Carmela and the late Michael Terranova and the late Frank and Mary Brophy. Godfather of Gabriella, Brian Jr. and Jacob. Son-in-law of Dana and the late Vaidotas Jakas and brother-in-law of Raymond Jakas. Also survived by many cousins.

Police Officer Thomas Brophy died of metastatic colon cancer that was caused by inhaling toxic materials while partaking in the rescue and recovery efforts at the World Trade Center site, following the 9/11 terrorist attacks. Officer Brophy had served with the New York City Police Department for 16 years, and is survived by his wife and 2-year-old son. He was assigned to the 109th Precinct. On September 9, 2005, all of the public safety officers killed on September 11, 2001, were posthumously awarded the 9/11 Heroes Medal of Valor by President George W. Bush.