A tribute to Sophia 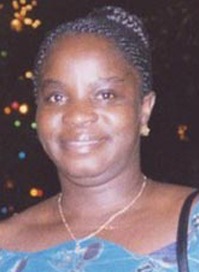 Sophia B. Addo: Luck, Then Hard Work Published: September 26, 2001   Luck, in the form of an immigration lottery, brought Sophia B. Addo to the United States from Ghana in 1996: a teacher of schoolchildren in Africa, she decided to take a chance and come to New York to further her own education. But getting into school here was not as uncomplicated as winning a lottery. She had her working papers, and landed a succession of housekeeping jobs while she improved her English. Already having passed an oral exam, she was due to take a written test on Sept. 12 to see if she was entitled to a G.E.D. certificate and college eligibility.     "She wanted to learn how to pronounce the language so she could express herself better in interviews," said her husband of 15 months, Joseph Ameyaw. Ms. Addo's aim was a career in teaching or nursing. In the interim, the 36-year-old tidied Windows on the World, commuting from their Bronx apartment. "She liked to read her Bible; she was a person who would comfort you, and when you were unhappy with life, she would use the word of God to make you happy," said Joseph. "To me, she was justice."