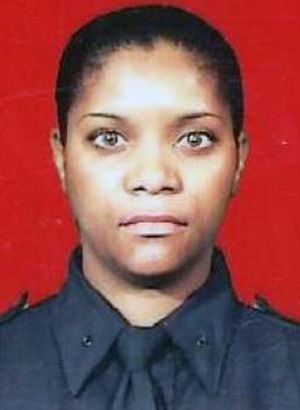 Retired Detective Megan Carr-Wilks joined the New York City Police Department on October 15, 1990, and began her career on patrol in the 60 Precinct. She also served in Vice Enforcement Division Retired New York Police Detective Megan Kimberly Carr-Wilks died peacefully in her sleep in St. Peter's Hospital on September 19, 2017, in Albany, NY at the age of 55.

She was preceded in death by her mother Martha Lynn Carr, a brother Dwaine Carr and brother Drake "Tory" Carr.
Megan was born in New York City on February 19, 1962, and was the eldest daughter of Martha Lynn Carr of Hudson. She graduated from Evander Childs High School in Bronx, N.Y. and was a graduate of John Jay CUNY in Manhattan and the New York City Police Academy. After college, she worked briefly in the Manhattan District Attorney’s office before being accepted into the academy.

Upon graduation, she was assigned to the 60th Precinct in Coney Island where she worked as a youth officer and later was promoted to detective with the Special Victims Unit. She worked for the NYPD for more than 20 years before retiring in 2010. She moved to Hudson in 2011 and was employed as a Resource Officer for the Hudson City School District. During her tenure on the NYPD, Megan was an emergency First Responder during the Sept. 11th terrorist attacks on the World Trade Center. She spent many, hours at the site and in 2012 was diagnosed with cancer brought on by prolonged exposure to the contaminated air. She struggled valiantly against the disease before succumbing last Tuesday.

Megan was one of the most loquacious, naturally funny, giving, loving and strongest women you ever met. From her independent, assertive attitude, loudness, love of travel and the finer things in life, right down to her unmistakable Bronx accent, she was a 100 percent quintessential New Yorker. She lived her life on her own terms and fought her illness with courage, determination and a sense of dignity, that was an inspiration to all. Megan loved life and was loved dearly by her family and all those who came to know her. She was a hero, and she will be greatly missed.

Detective Megan Carr-Wilks died as the result of cancer that she developed following her assignment to the search and recovery efforts at the World Trade Center site following the 9/11 Terrorist Attacks.

Detective Carr-Wilks had served with the NYPD for 20 years. She was survived by her husband, two sons, and brother.