Kenneth the world is lost

Kenneth the world is lost with out you, and Kenneth's family, if you see this, I'm very very very sorry for your loss and keep your head up

I had the honor to climb those steps today in honor of this courageous man!

Thanks for allowing me to get to know him through your stories. 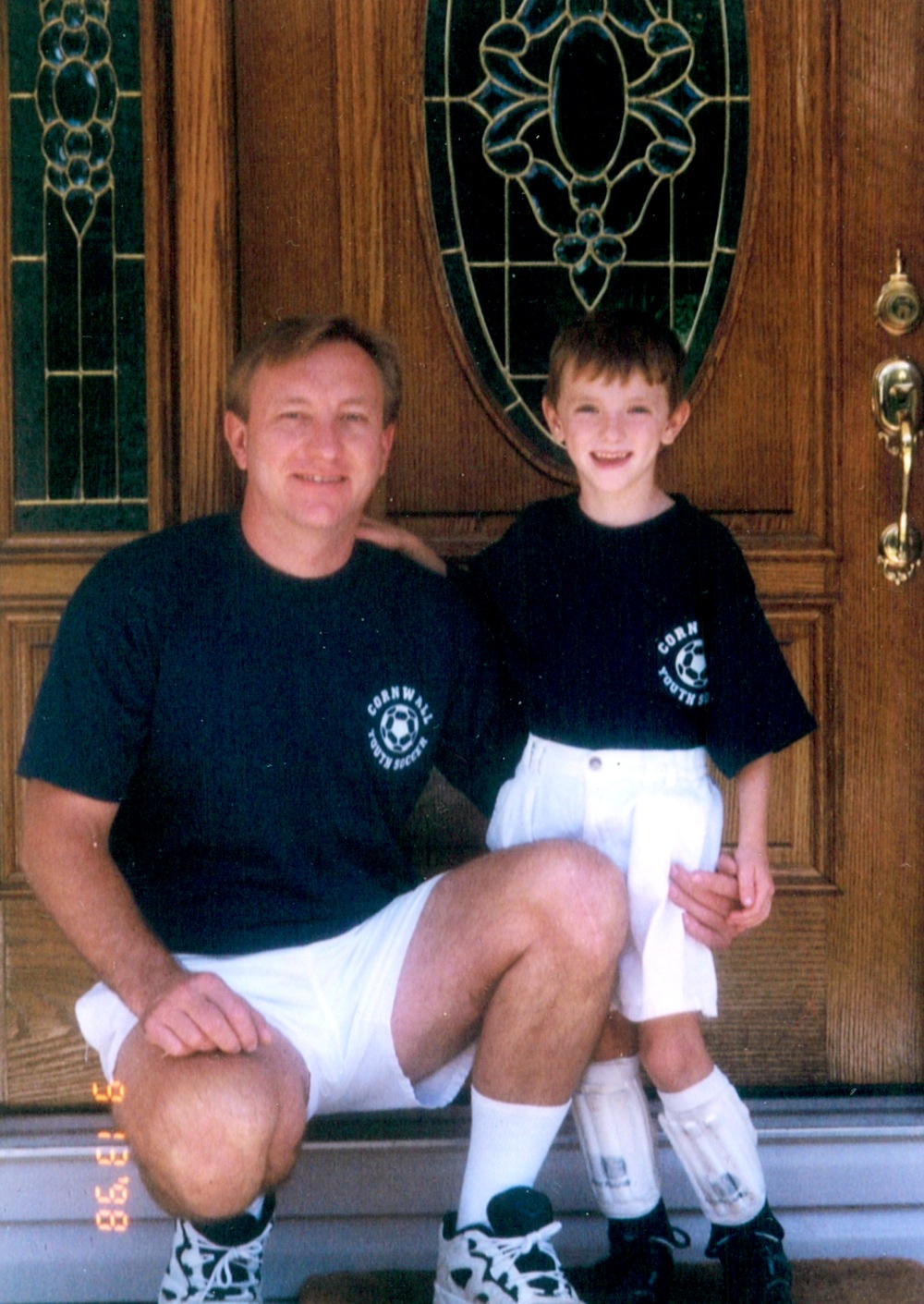 Kenneth Kumpel with his son Carl 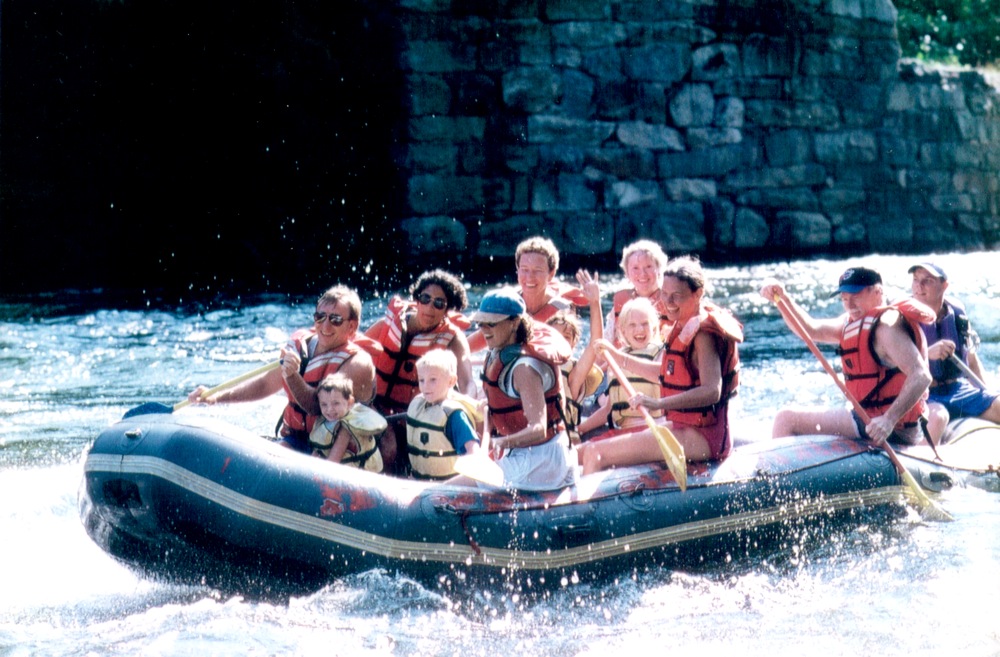 Kenneth Kumpel with his family on river rafting vacation 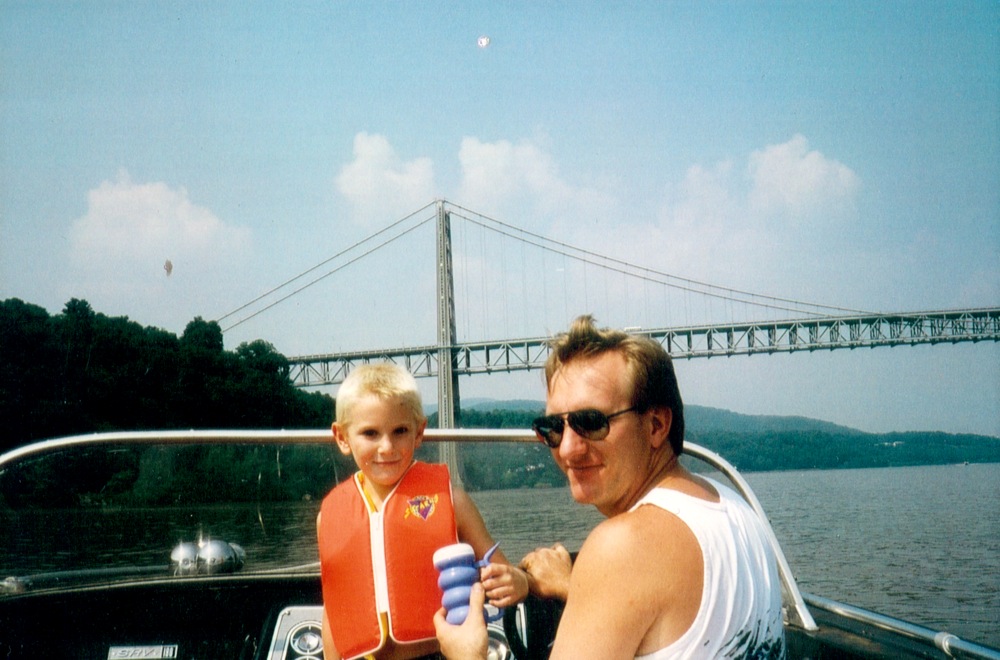 Kenneth is pictured with his son on a boat on the Hudson River. 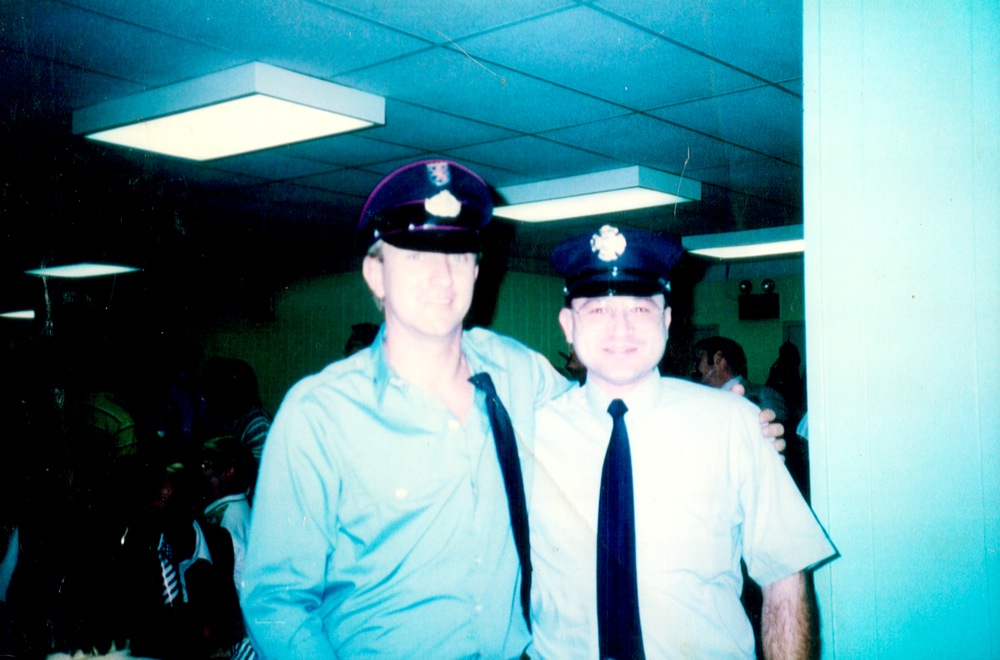 Kenneth Kumpel at Steuben Parade with a coworker 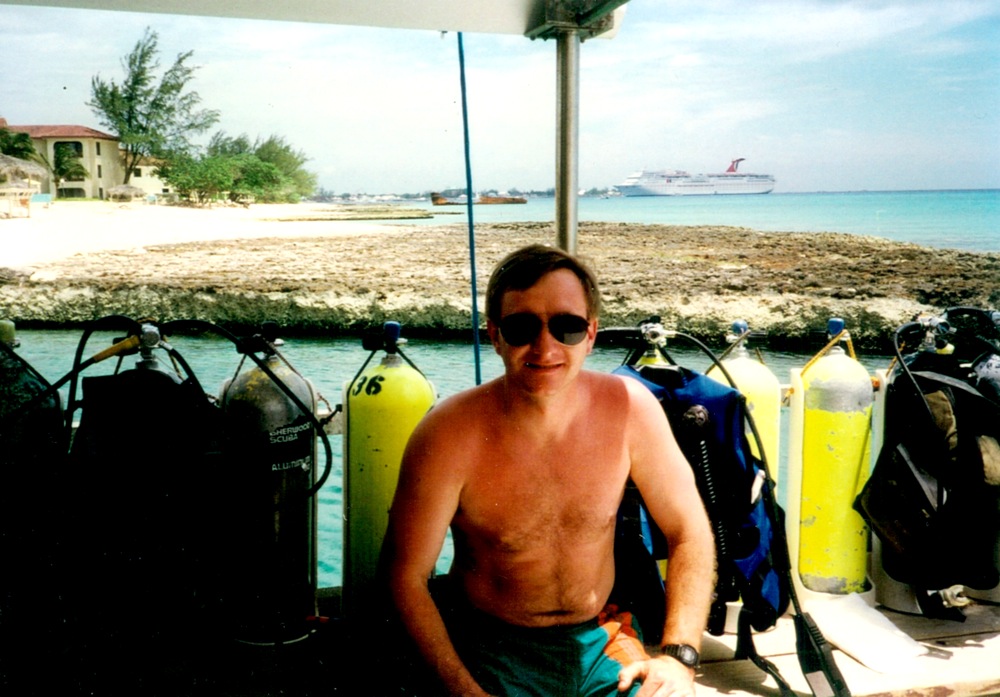 Ken on vacation at a scuba diving shop 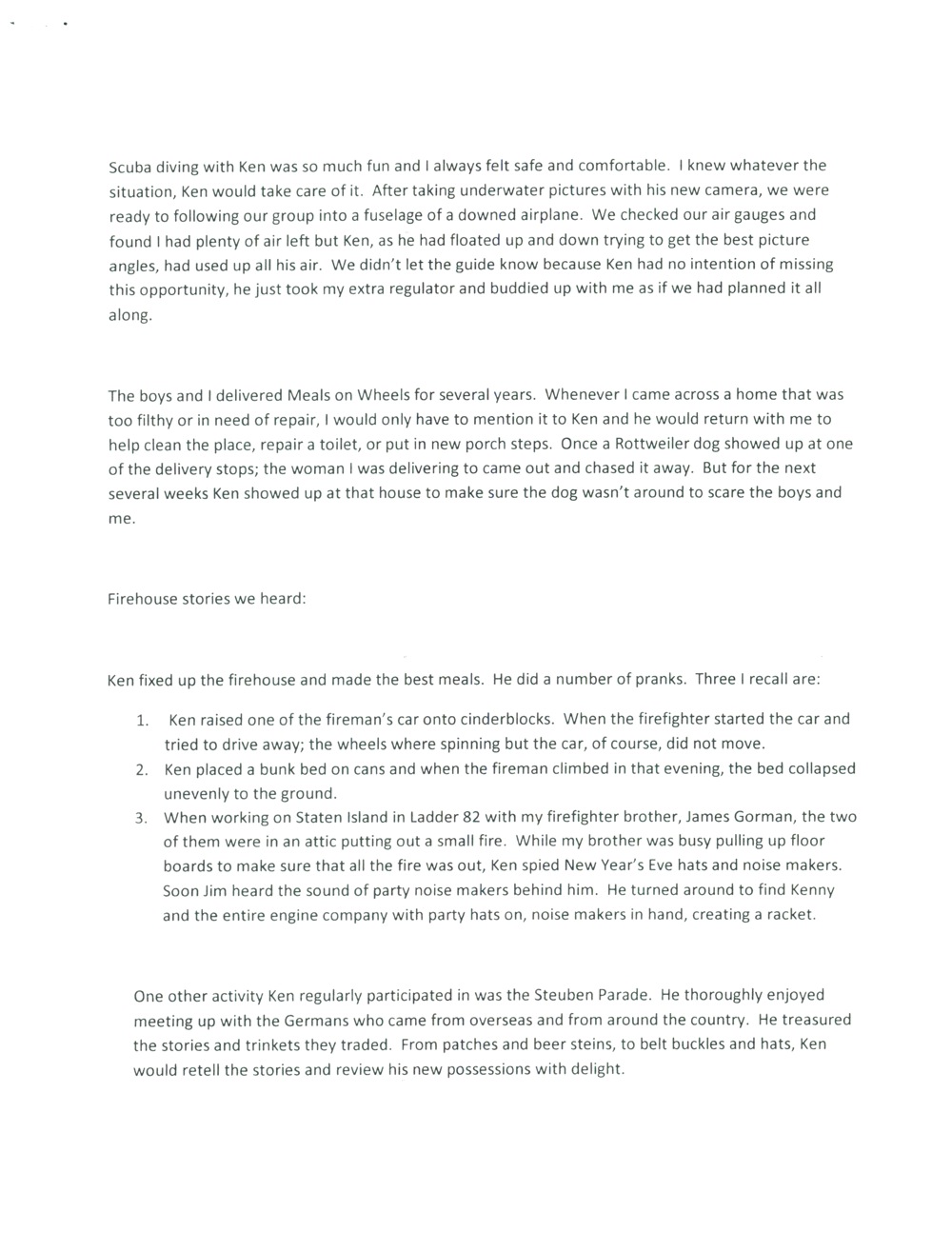 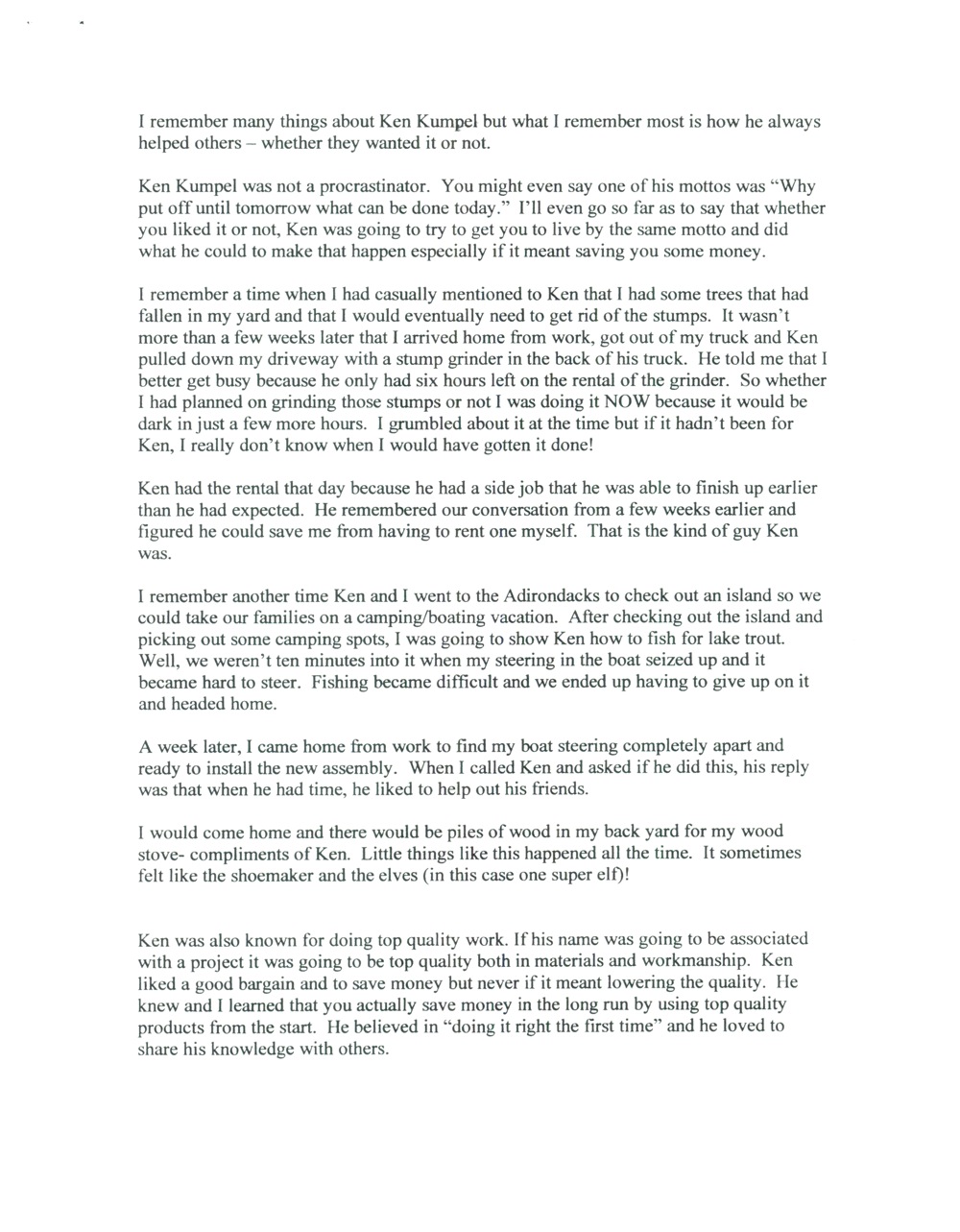 Written memories of Kenneth Kumpel by his friend Kennneth Lindland 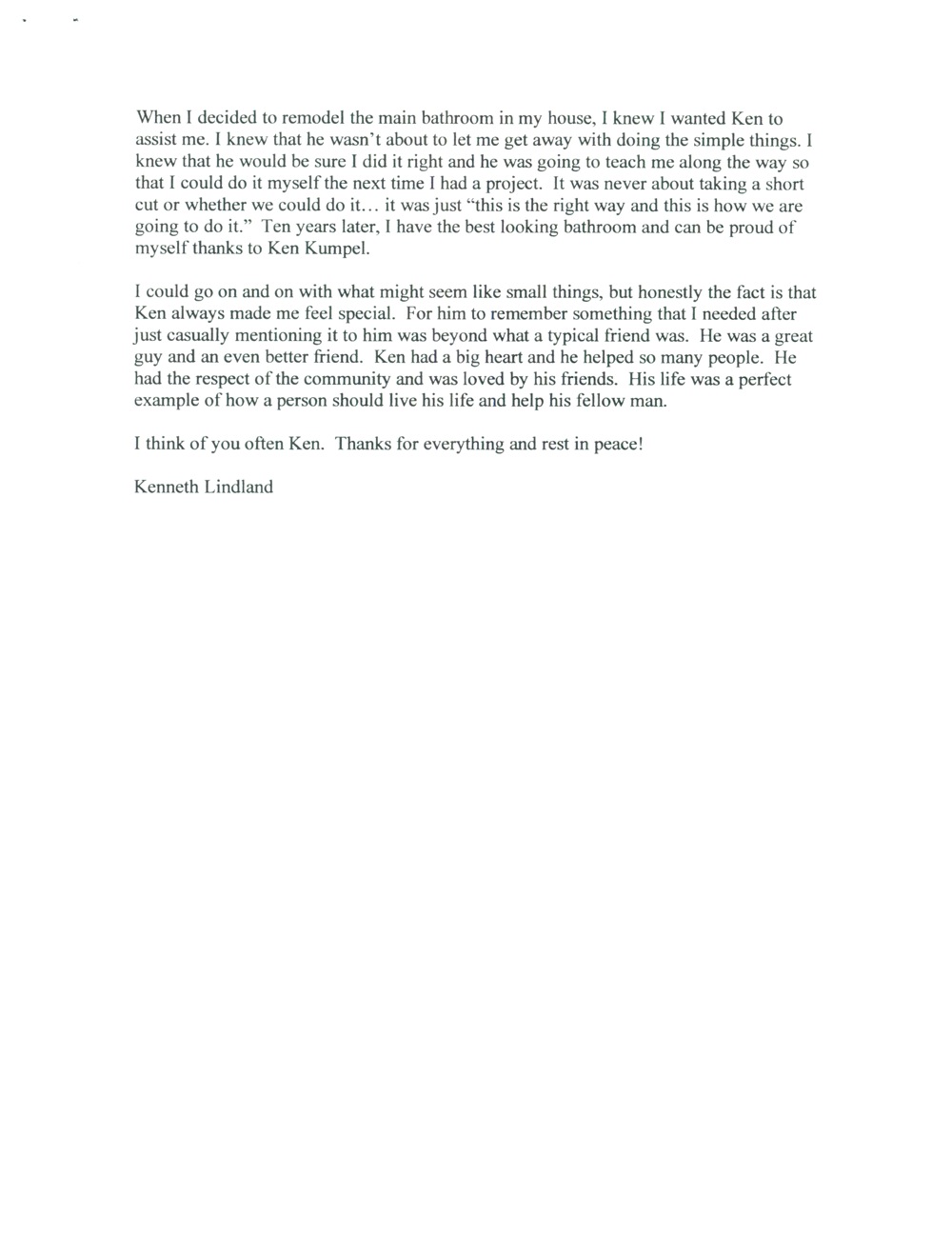 Written memories of Kenneth Kumpel by his friend Kennneth Lindland

Photo of badge, screwdriver and wrench recovered from Ground Zero 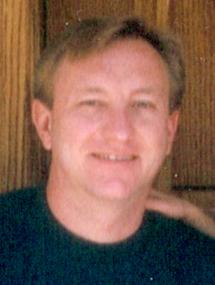 FIXING UP THE HOUSE
Kenneth Kumpel

Raised by his mother and grandmother, Kenneth Kumpel, 42, spent much of his adulthood filling in the gaps left by an absentee father. He was a self- taught handyman and craftsman around the house; an endlessly patient, delighted father of Gregory, 11, and Carl, 9; a buddy who sought, through work, the camaraderie of other guys, first as a New York City police officer and then, more happily, as a firefighter.

Because firefighters can have a few days off between shifts, Firefighter Kumpel, a steady, warm presence, had time for his sons. He cooked, cleaned, coached, volunteered and endlessly fixed up their house in Cornwall, N.Y., perfecting his stained-glass windows, tiling and floors.

That was his castle, his home. But the firehouse, Ladder Company 25 on Manhattan's Upper West Side, was Firefighter Kumpel's home away from home. He would fix up the firehouse, too. Oh boy, would he.

Why is that bed slowly sinking to the floor when a firefighter flops on it? Someone propped it on empty soda cans! Who switched the handles and hinges on the refrigerator door? Smeared peanut butter on the phone receiver? "The Fire Department definitely helped complete him," said Nancy Kumpel, his wife of 18 years.