I worked with Gene for more

I worked with Gene for more than 30 years through his various assignments and found that he was always upbeat and no matter how busy or pressed for time found the time for even a brief conversation and sharing of well wishes.

Gene was protective of the homeless who sought shelter at the WTC and would often provide them with food coffee or contributions. Gene was dedicated to the patrons of the WTC and his selflessness and devotion to humanity drove him to stay and direct NYFD and police personnel to escape routes and evacuation of the complex which ultimately led to him giving his life so others could be saved. All his friends in the World Trade Department and the many customers and homeless he aided are diminished by his departure. I still miss him and will miss him always. 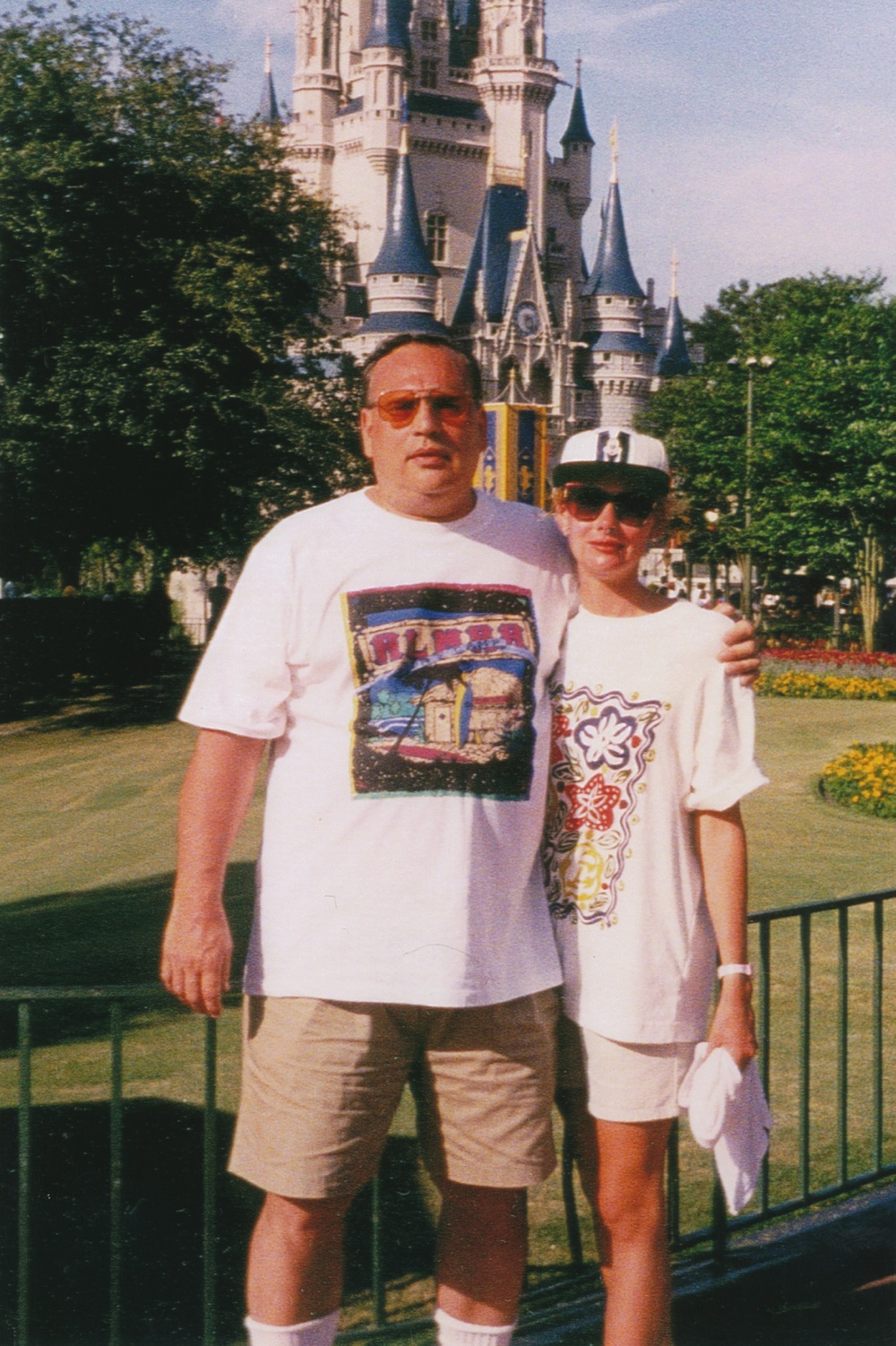 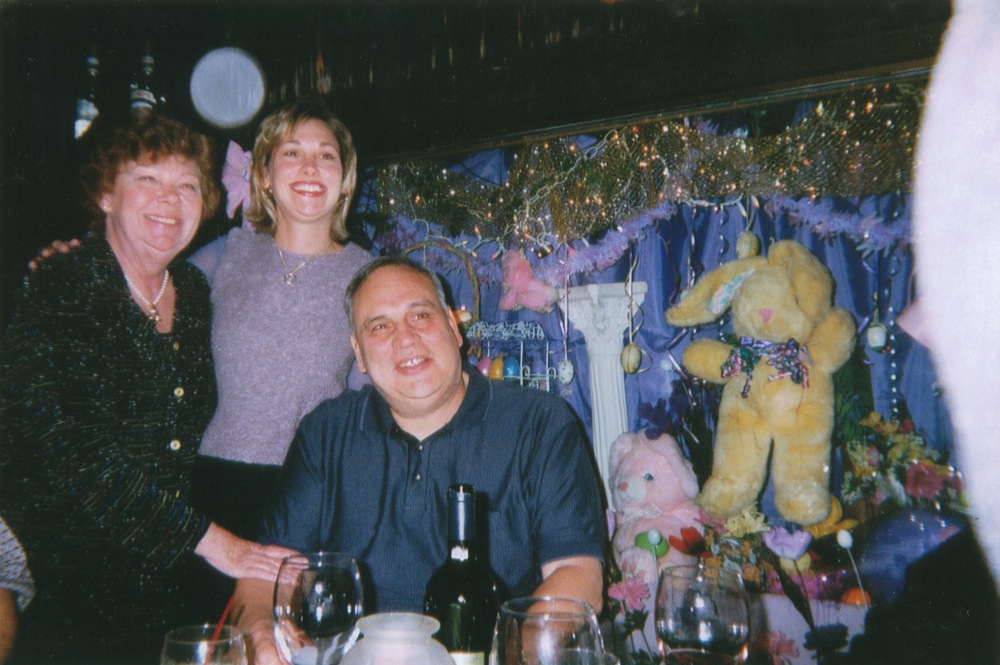 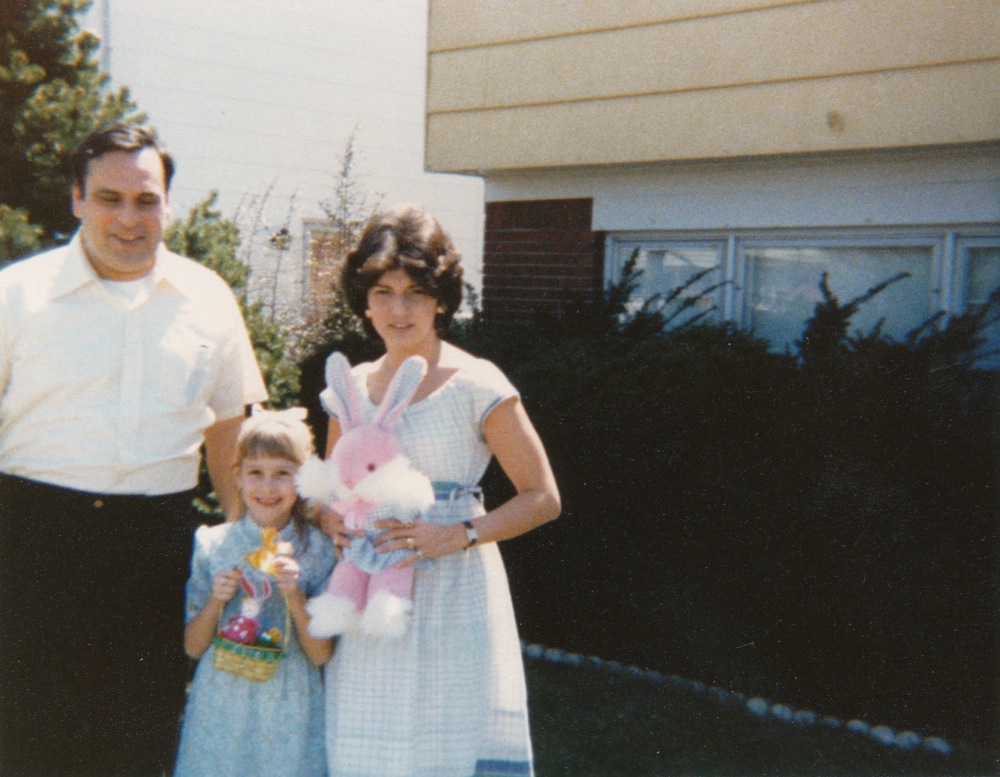 Dedicated to the Towers 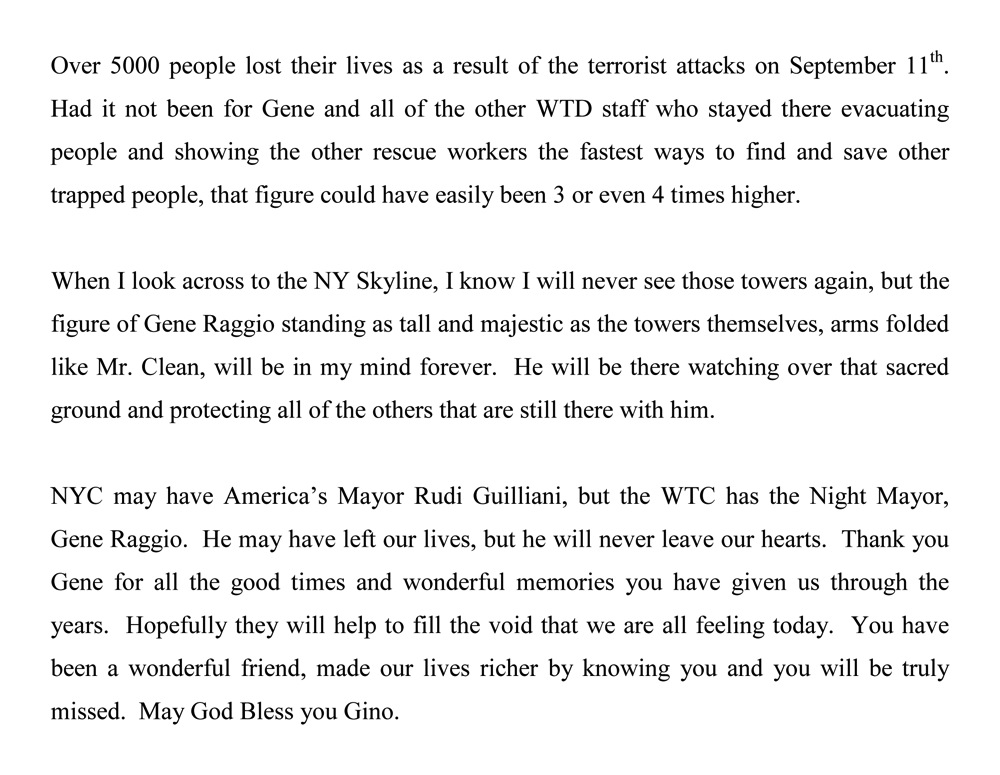 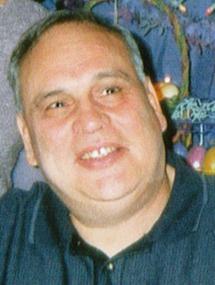 Eugene was born and raised in Greenwich Village in NYC. He married in 1967 and settled in Staten Island NY with his wife Francine. In 1973 their only child Melissa was born.

Family and friends described Eugene as a “Simple Man” who loved almost any type of sports, was devoted to his family, cared about people, and was capable of making anyone laugh. If he was your friend you know he would always be there through the good times and the bad. He could be found around town with Yorkshire terrier, Tinker. Many people who would see him in the neighborhood stores referred to him as “The Big Guy with the Little Dog.”

Eugene was with the Port Authority for 39 years. While he held various positions with the PA he truly enjoyed his final one as Supervisor of Operations for the World Trade Department. He was referred to as the “Mayor of the Towers” since how could often be seen walking through the buildings checking to make sure that everything was in proper order. He would invariably stop and speak with tourists to get their reaction to the magnitude and beauty of the buildings and answer any questions they might have. His walks through the Towers also brought him into contact with individuals who were less fortunate and was not unusual to see Eugene stop and buy a cup of coffee and roll for that person.

In the 1993 bombing, Eugene was in an office in the sub basement of the Trade Center whine the bomb exploded. The impact of the blast threw him upside down in his chair and he was injured when he hit the ground. He managed to escape by crawling through water and debris toward outside light he saw entering through a hole in the wall ahead of him. Paramedics ran to assist him when they saw him emerge and advised him that he needed to get medical treatment for wounds suffered. Instead, Eugene wend directly to one of the makeshift command posts that had been set up on the sire so he could connect with PA workers to see how his people were and them went directly back to the Towers in order to assist in getting others out of the smoke filled buildings.

On 9/11, he called his wife right after the first plane hit the North Tower. He told her he was staying to do whatever was needed to get people out. That was the last time she ever heard his voice.

The last hours of his life could only be pieced together through what those who survived this horror passed on to the family as well as the information documented in the 9/11 transcripts which were made from audiotapes released by the Port Authority and read by his sister Teresa.

According to members of the FDNY, Eugene stood “shoulder to shoulder” with their men during his last horrific hours. While Eugene could have left the premises for safer ground, both he and the FDNY command personnel knew that his in-depth knowledge of these buildings could dramatically assist the FDNY personnel in their rescue attempts. The transcripts noted that Eugene was in constant communication with rescuers directing them on the best way to reach trapped civilians and reassuring those civilians that help was not only on the way but keeping them abreast of where the rescue teams were. A specific example of his efforts was heard on the audiotapes in which he keep reassuring people on the 22nd floor that they would be okay. Those people did, indeed, make it out to safety.

Eugene always felt if you could help someone it was incumbent upon you to do so and on that day his concern was not for himself but rather for the help he could give others.
Eugene was awarded the Civilian Medal of Honor by the Port Authority which is given to a staff member who performed a specific act which clearly involved extreme danger and exemplified extraordinary bravery in the face of circumstances which led to grave person injury or death. On September 9, 2005 he was also awarded the Medal of Valor by President George W. Bush at a White House Ceremony.

Eugene left his footprint on the hearts of so many people, those he knew and those he didn’t know. At his memorial service people came up and introduced themselves and told stories about how they came to know him, some for the first time on that very day, and how he helped save so many.

He will never be forgotten by those who lives were changed or given back to them on that tragic day. For his family, he will always be that “simple man” who made you laugh; that “big man” whose presence made you feel safe. And for all who knew him, that “loyal friend” who always had your back.

May God forever hold him in the palm of his hand and may everyone who knew him always hear his laughter in their heart.

When Eugene J. Raggio said he was taking his dog, Tinkerbell, out for a walk, it meant driving her around in the car through their Staten Island neighborhood. "Big man, tiny dog, we used to say," said his daughter, Melissa Raggio, recalling her tall father doting on his three-pound Yorkshire terrier. About the only place Mr. Raggio did not take the dog was to the World Trade Center, where he worked as a building operations supervisor for the Port Authority of New York and New Jersey since the day the towers opened.

"He absolutely loved those buildings," his daughter said. "The people he worked with were his second family. He was even good to the homeless people who hung around the tower."

Her father, who was 55, called his wife, Francine, just after the first plane hit the north tower. There was no question that he would stay to help. It was his job. "If he hadn't been working that day, he would have been just as affected if the towers had collapsed and he hadn't been there to help," his daughter said. "His life would never have been the same."