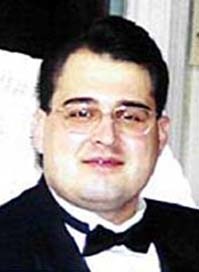 At a time of grieving throughout this city and country, the DiFranco family's grief is more than almost anyone can bear.

In the last year, they have celebrated life's most joyous moments and mourned the death of a loved one. Now they are trying to make sense of the loss of their son, Carl DiFranco, who has been missing since the attack on the World Trade Center.

The family was together a year ago Sunday to celebrate the marriage of Mr. DiFranco to Loren Bosso, after six or seven years of dating. In April, Mrs. DiFranco died of complications of a heart condition. The family knew of the heart problem, but never could have anticipated the urgent need for a heart transplant, which could not be arranged in time.

In May, a baby girl was born to Mr. DiFranco's sister, Nancy Levy. The new uncle went to the hospital while his sister was in labor and remained a support through the three and a half weeks the premature baby remained in the hospital. Still grieving for his wife, Mr. DiFranco wrote a thoughtful Mother's Day card to his sister, assuring her everything would be OK.

He was a regular visitor on Saturdays, doting on his new niece, who shared her middle name with his late wife. Luckily, one of the few times Mr. DiFranco held the baby, whom he believed too little to hold yet, the moment was captured in a picture.

The 27-year-old lifelong resident of Huguenot joined Marsh & McLennan on the 100th floor of Tower 1 in January. He had previously worked with RGL Gallagher, located only a few floors below Marsh & McLennan in the World Trade Center. "The friends from work came to his wedding and his wife's funeral," said his mother, Carole DiFranco. "Now, most of them are gone, too."

His sister noted that Mr. DiFranco had grown closer to his friends at work as they helped him to cope with his wife's death.

The brother and sister, only two years apart, were engaged the same year and the couples often socialized. When Mrs. Levy and her husband bought a house, her younger brother displayed talent for meticulous and craftsmanlike work during two months of renovations. He and his mother installed a much-admired ceramic tile floor, and he installed counters and faucets on his own.

On Sept. 11, Mrs. DiFranco discovered a flat tire as she was driving her son, who lived in the apartment downstairs, to the train station. "Take my truck," her son said, "I'll fix it when I come home." The incident made him 15 or 20 minutes late, but "even late, he was early" on a morning when being late would have saved his life.

The grief-stricken parents and sister are left with affectionate memories of a good, generous and loving son, brother and uncle. One that stands out is a family trip to DisneyWorld a couple of years ago in celebration of his parents' 30th wedding anniversary.

lege in the accounting firm Campos Stratis, Manhattan, where he worked for a couple of years before joining RGL Gallagher in the forensic accounting department. In January, a group from RGL moved on to Marsh & McLennan. Mr. DiFranco worked in the claims, accounting, preparation and services (CAPS) division.

A bowler in elementary and high schools, he had recently taken up tennis and jogging. He was trying to encourage the rest of the family to join him in his new interest in health and fitness.

With little to console the family, his sister said, "He is with his friends and his wife, his soul mate."

"We miss him dearly," they said.

In addition to his mother, Carole, and his sister, Nancy, surviving are his father, Carmelo, and his paternal grandfather, Philip DiFranco Sr.