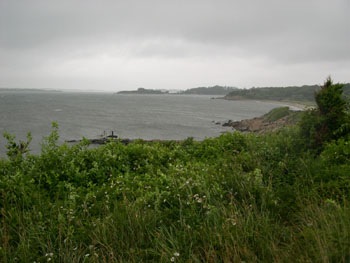 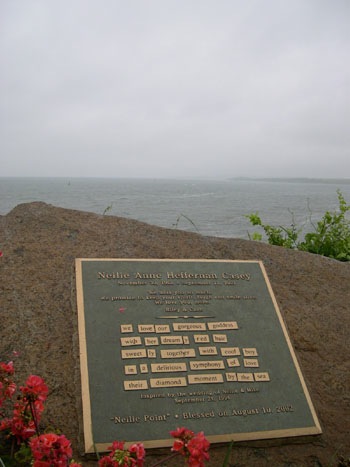 Purpose: Neilie Anne Heffernan Casey was a victim of the September 11 attacks. Neilie's mother, Anne Heffernan, said the purpose of the memorial is so that "we shall never forget." She added that it is "precious to have small memorials, rather than just the large ones." Reason site was selected: This natural cliff site was selected by Neilie's husband Mike because it overlooks the beach where they were engaged. It is in the shadow of the lighthouse where they took their wedding pictures, and was a very special spot to both of them. Also, it is a beautiful harbor entrance overlook where one can watch the water, the sun, Martha's Vineyard, and the boats. On federal land, it is guaranteed to be protected in perpetuity. It is a site that is both small enough to be personal, when sitting on the bench and looking at the memorial; as well as very public. It is a tourist destination that receives many visitors each year. Events planned for site: The memorial was dedicated and blessed in August of 2002 in a ceremony that included family, friends, residents of the Cape, and the Coast Guard. The site now contains a bench overlooking the water and a plaque affixed to a stone that was already in place. The plaque has three sets of dates: the years of Neilie's birth and death; the date of her marriage to Mike; and the date the plaque was blessed. Mike's family wrote a poem to Neilie that is etched on the plaque as well, serving as a permanent reminder of the type of person Neilie was. In addition to being viewed by lighthouse visitors throughout the year, the site is passed during the annual Falmouth Road Race, with Mike and his friends pausing in remembrance for Neilie at that spot. Finally, it is a site that Anne Heffernan and her husband Kent Kannenberg return to regularly. They tend the flowers that they leave in remembrance, sit and enjoy the view, and share Neilie's story to visitors that want to know. Kent noted, "I get so much out of talking to people." Do you believe your memorial is a sacred place? Kent replied, "When most people lose a child it is a very isolating experience, this is very public. Every human being wants a chance to interact with another human being, and what makes it so special to me is meeting the other people that come here." Anne replied that she finds the site to be very special, and meaningful, but not sacred because it is so public. She appreciates the natural beauty of the site, noting, "you own the day where you see a sunrise over the ocean. I feel better, it's hopeful."