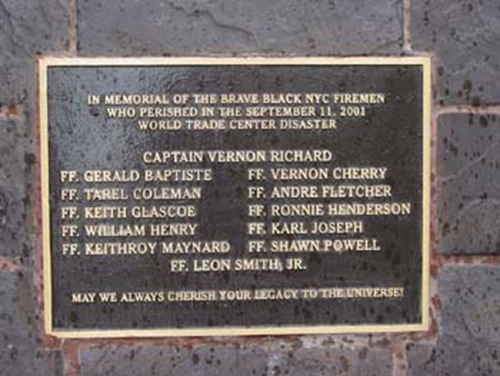 The black firemen of NYC who perished in the September 11, 2001 World Trade Center disaster

Purpose: Gardener and retired social worker Herbert Tibbs spoke about the development of the garden, "First Quincy Street garden was first registered as a GreenThumb garden in 1981. We have first, second, and even third generation—little babies and toddlers—that have been on the block for many years. The neighborhood was in transition at the time, but we still have a number of seniors. It was mostly one and two-family homes, but during this building boom, every little vacant space is now becoming concrete and metal and steel, and that was one of the things that really bothered me. Because I think, in urban communities, there is a great deal of congestion. People do not have open space. They don’t have the necessary greenery that they need for the purposes of oxygen. Urban planners, builders and politicians should actually develop communities in such a way that parks and gardens become ventilators for the community, because that’s the only way that we’re going to reduce a lot of the environmental diseases like asthma. Plus, I mean, it’s just comforting to go sit in an open space."

Reason site was selected: Green Guerillas is including this garden in its Trees for Life and Unity project because of the September 11 memorial, event, and dedication that were already been held in the garden. Also, the gardeners are interested in planting more trees in this large garden site, either to serve the community, or to honor other memories, as well as to 9/11.

Events planned for site: On September 11, 2003, approximately 40 uniformed firemen and 20 family members of fallen firefighters came to the garden for the dedication of the "Hook and Ladder" sculpture and plaque in memory of the fallen New York City black firefighters. The ladder itself was scavenged from the garden grounds by Tibbs, adding another layer to this "living memorial." Rebecca Ferguson added, "This place was packed. You couldn't get down the street, and it was really wonderful because the firefighters lined up on the street and did a really nice processional." In addition to the September 11 memorial, First Quincy recently lost one of its gardeners, a 44 year old woman in perfect health who was a doctor. There was a memorial held in her home, but the garden also planned to set aside her plot and plant it with memorial flowers only for that season, rather than giving it away to another member. Beyond memorials, the garden has hosted job and career fairs, arts fairs, and health fairs. Tibbs noted, "Because there was so much unemployment and underemployment in the neighborhood, our first event was to have a job and career fair to try and meet some of the needs of the community."

Do you believe your memorial is a sacred place?: "Absolutely and categorically, because when we had our memorial ceremony, we had a bishop of International Fellowship and a priest of the African church. They came and we had libations--the sprinkling of water--and we sounded the names of all of the firemen who were memorialized. This is a sacred space," Tibbs said.